SABEU's CEO appointed to the Senate of Economy Europe

We feel honored to be appointed to the Senate of Economy Europe and support the mission towards an eco-social market economy. SABEU has shown strong contribution in related fields by aiming to:

The Senate of Economy is ideologically and politically neutral. It is not geared towards making profits and surpluses and is committed to the objectives of the European Union and the United Nations. From a European perspective, one of the most important goals is to promote European integration and the further development of the European Union as an economic and peace community. In this sense, the tasks also include supporting the EU Commission and the EU Parliament and their elected representatives.

This month our CEO Dennis Benkmann received his certificate of appointment from Dieter Härthe (Senate of Economy International) during a ceremony in Strasbourg. After inspirational speeches from the Vice President of the European Parliament, Katarina Barley and Moritz Körner (Member of the European Parliament and the FDP´s Executive Committee) the newly appointed senators already started exchanging ideas on meaningful innovation to support the European purpose. 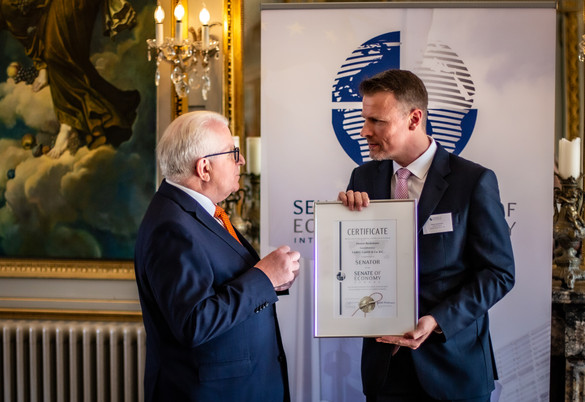 Already subscribed for our newsletter?